The 4th-century Old Saint Peter's Basilica in Rome and nearby buildings were gradually demolished in the 16th century to make way for the grand St. Peter's which opened in 1626 and which we know today. What had been there previously was far less grand: here is St. Peter's Square and the entrance to the old forecourt:

The Vatican archivist, Giacomo Grimaldi, was charged with recording what had been destroyed. Among the losses was a huge wall mosaic by the Renaissance artist Giotto, the Navicella (literally "little ship"), which showed Christ walking on water. Grimaldi sketched it at it was then, rather different from the restoration that now exists:

Much of his documentation, together with drawings, is to be found in a codex at the Biblioteca Apostolica Vaticana, Barb. lat. 2733, which dates from 1620. You can now leaf through it online. The St Peter's exterior is shown at folio 152v (although I screen-shotted above an enhanced composite from the Met guide to the Vatican) and the Navicella is at folio 147r.

This compendium is among the most interesting items to be digitized and uploaded on May 21. Here is the full list: 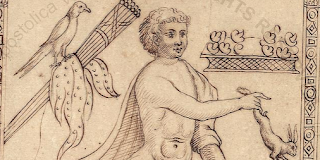 Also released earlier in the week:

As always, if you know more about any of these items, please add a note in the comment box below. [This is Piggin's Unofficial List 12.]
Share